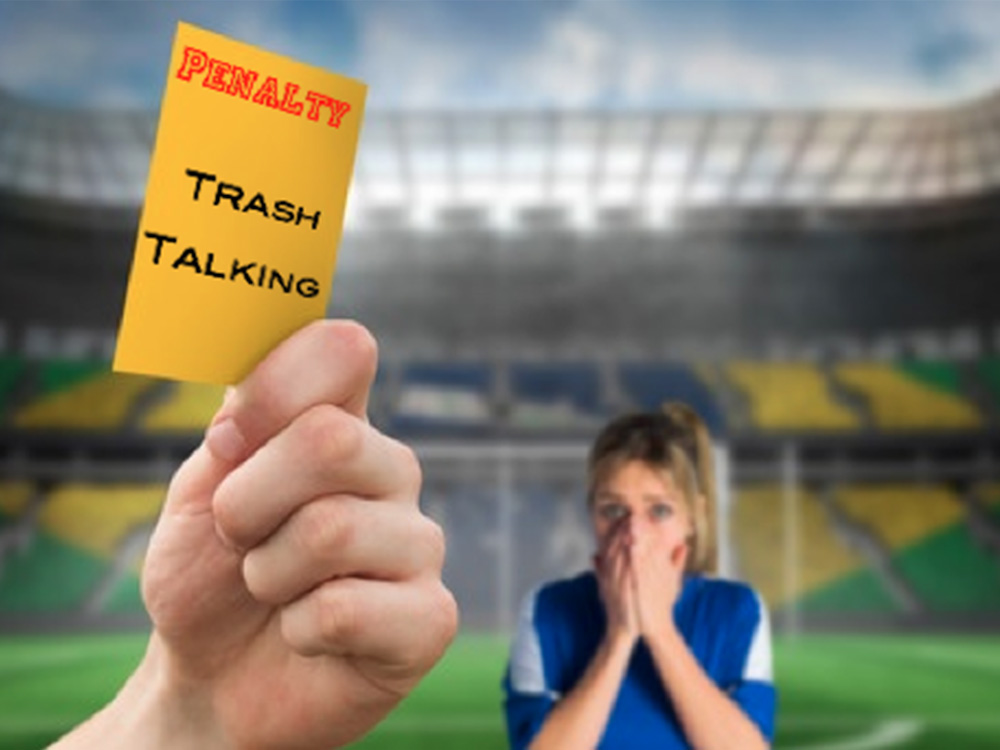 Discussion: You are not alone. This is a societal problem, one that has reached epidemic levels in all sports. Kids imitate the antisocial behavior they see on television, pick up from adults, or witness from older kids at school. Trash talk is an integral part of the bullying, hazing, and teasing cycle. It involves the subtle exclusion of an individual or small group of individuals. It may be socially tolerated, but it shouldn’t be.

You mustn’t take these put-downs at face value; they do more than just denigrate someone. There’s a much bigger issue here. It’s a form of social combat that can quickly lead to more dangerous exclusionary behavior. Regardless of whether it’s on the court, on the playground, at home, or in a school corridor, it is a form of stylized dehumanization. And, as we mentioned earlier, dehumanization, when left unchecked, can lead to much worse. When child-athletes and their parents dehumanize opponents in youth sports competitions, this “us vs. them” anti-communal behavior opens the door to bickering, brawling, and worse, as has become alarmingly apparent across America in recent years. We see players and parents fight each other, vicious assaults on referees, and, in one extreme case, one parent who killed another during a dispute at a hockey arena. Trash talk really must be nipped in the bud, because it is the first stage in a spectrum of negative behavior that, in its extreme form, can lead to deeply awful antisocial actions.

Why do kids behave this way? They may be imitating others, but the current runs deeper. For one thing, when a child sees that everyone around him is putting people down, he often figures he’s better of going on the offensive, too. It becomes a form of self-protection or defensive communication. Kids also assume that by engaging in put-downs and trash talk, they can improve their own social standing. Fast-talking put-down artists look tough and cool and dominant.

Solution: That, of course, is not true. Show us, anywhere, in any sport, a truly respected athlete who trash talks. The leaders—the team captains—are respectful and care about their fellow players; that’s why they are admired. Talk to your kids about this. Tell them that the kids who rise through the ranks to become leaders are the ones who care about their teammates and support them rather than undercut them. The trash talkers, on the other hand, eventually end up as loners.

Explain to your kids that the trash talkers on their team may appear to be confident but are often insecure underneath all that bravado, and it shows. The more you trash talk, the more you signal to players on your team and other teams that you lack self-confidence.

Be direct with your ten-year-old. He’ll get it. Tell him this is not the way to go. In his book Best Friends, Worst Enemies: Understanding the Social Lives of Children, Michael Thompson discusses put-downs, exclusion, and bullying as a method to gain popularity. He exposes the myth that such behavior elevates children’s stature in group settings. In fact, they are not impressive to anyone. They may be funny or appear to be cool at a given moment, but that kind of behavior does not win you lasting friends.

Kids play sports mostly to have fun and make friends, and trash talk does not lead to deep friendships. It leads to brief, shallow alliances. On a visceral level, when you behave that way, you reveal to your teammates that you are someone who could turn on them, too, at any moment. If a child is disrespectful to players on other teams, kids on his own team will back off. It might seem at First that he’s tough and cool, but what he is really showing is that he is unpredictable and can’t be trusted. Obviously he has poor personal boundaries. That negativity, if you are his friend, could be turned on you at a moment’s notice. All of this might seem like it would go over the head of a typical ten-year-old, but we have found that when asked about this in an age-appropriate way, kids get this; in fact, they really get it.

Teach your kids by your own example. It’s a powerful one. Go on a family put-down diet. Become aware of your own inadvertent trash talk; we don’t realize how we put each other down all the time, whether we are husband and wife or brother and sister. Unfortunately, this becomes a frame of reference for our kids. When you make a slip—which we do, all the time—that’s okay. Just reframe your statement in a positive way. We know how tough it is, but keep trying. You can even make a family exercise of it as you note how many times you put each other down without realizing it. Raising this under-the-radar behavior up into consciousness, even when it only involves noticing and pausing when it is done, is powerful. ♦