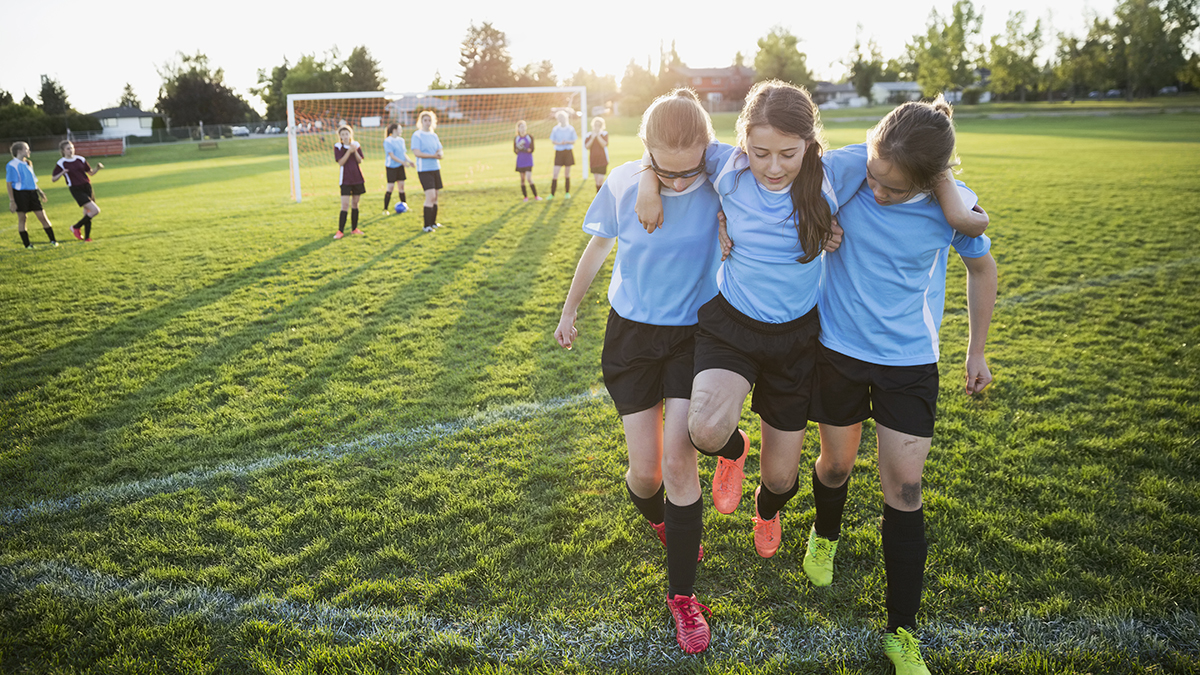 Teen ACL injuries on the rise, UNC researchers call for wider use of injury prevention programs. Among teenage athletes, the rate of ACL tears is rising, with the sharpest increase seen in females aged 13-17 who, over the last 13 years, have experienced a 59 percent increase in the number of required reconstruction procedures, according to a 2017 study published in the Journal of the American Medical Association (JAMA) Pediatrics.

As the next sports season begins this issue should not be overlooked – there are ways to defend against this happening to your daughter or sports organization. Here’s what I suggest after years of training ands developing young female athletes:

Too many trainers fail to train female athletes correctly. Their training programs focus on the front of the body:

They neglect the back half of the body:

Females should not be trained like men. Their workouts should focus on improving range-of-motion and strengthening specific muscle groups—like glutes and hamstrings—during pre-season. What’s more, keeping up with such training throughout the regular season can dramatically reduce the risk of ACL injuries.

To be more specific, one of the major causes of female athletes’ injuries is the overdevelopment of their quadriceps—the large muscle group on the front of the thighs. This over-strengthening typically translates into weaker hamstrings—the large muscle group on the back of the thighs. The result: instability in their knees when decelerating, rapidly changing direction or landing from a jump. This heightens the probability of a ACL injury when practicing or competing.

One of the most effective hamstrings strengthening exercises is the Nordic Hamstring Exercise. This exercise not only develops the hamstring, but also decreases hamstring injury rates by 60%, and reoccurrence by 85% (A. Arnason – 2008, University of Iceland – Department of Physiotherapy). 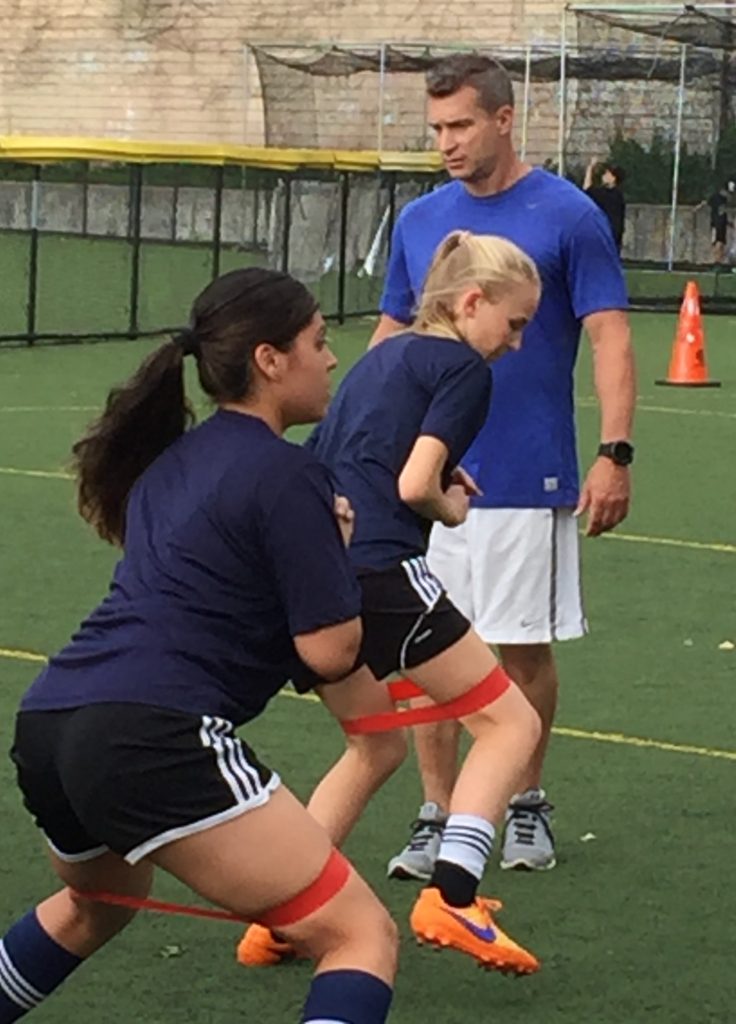 As an athletic performance specialist that trains female athletes daily at my Fairfield County, Connecticut practice, I specialize in movement and speed training. And one of the key things I emphasize is proper movement technique. If you don’t move correctly you won’t be able to perform your sport-specific skills with optimal success. And, more critically, if you don’t use proper movement techniques you can greatly increase your risk of serious injuries like ACL tears.

The 3 key movement techniques are:

A) Running Form – Running is most important athletic movement that most athletes need to master. Yet we pay little to no attention to practicing and/or instructing athletes on the proper way to run. Proper running form improves speed, agility, and dynamic balance, and reduces the likelihood of many injuries. It is one of the most essential skills needed to reach optimum performance.

B) Deceleration – Learning to slow down and stop is a skill that’s essential to both an athlete’s performance and injury prevention. Many sports require an athlete to slow down and stop repeatedly during the flow of competition. Deceleration also plays a vital role in change-of-direction movement. Slowing down properly in order to accelerate again is critical to running a proper route as a wide receiver, transitioning from offense to defense in soccer or drop stepping before driving to the basket in basketball. A majority of knee injuries do not involve contact. They are a result of improperly executed deceleration. When an athlete slows down or stops improperly, she is often upright and in a straight leg position. This posture is dangerously unstable.

C) Jumping & Landing – This essential skill seems so basic but is often not practiced or taught. Improperly executed jumping and landing not only limits performance but is a recipe for an injury disaster. Many athletes injure their ACL when landing incorrectly. This can be a result of hip instability, in addition to weak hamstrings and glutes, as we mentioned above. An athlete who lands knock-kneed (an internal rotation of the knee) is vulnerable to an ACL inju 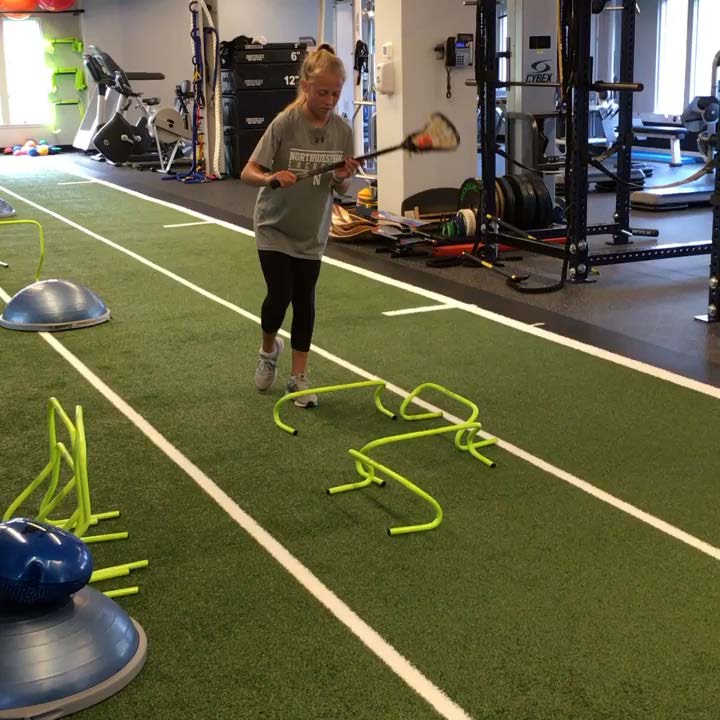 Injury prevention is not often addressed at all by coaches and trainers. But when it is, the focus is typically only on pre-season workouts. That’s not enough. Injury prevention training should be conducted throughout the season, especially because the body begins to fatigue as the season progresses. Stabilizing muscles begin to weaken, and movement skills can start to deteriorate.

Proper training can really help prevent injuries: For the past 2 years I have incorporated a consistent series of injury-prevention and movement-skill training programs throughout the pre-season and regular season with the top-ranked female high school lacrosse & field hockey programs in the state of Connecticut. Over this period there have been no lower limb injuries. This was after a rash of ACL injuries occurred throughout prior seasons. I recommend single leg balance and strengthening exercises be conducted at every practice: at least 3 to 5 times per week. It is time to start training female athletes differently from their male counterparts. We can develop strong, healthy young female athletes at a proper pace and with appropriate movement and strengthening techniques, so that they stay healthy and perform to their potential.  ♦

Scott Lancaster is also the Founder & CEO of Trick It Out Sports, and the new & innovative training method Champions of Speed.